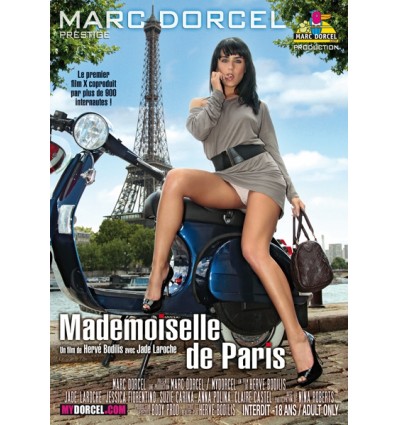 Erotic Paris, Paris with its secret affairs and most of all: its Parisiennes. A frivolous city, like the airy dresses floating over the wet pavement, exposing high heels, stockings and refined lingerie... "Mademoiselle de Paris" reunites the most stunning actresses of the moment for an ultra-Dorcel movie. Invite yourself into the lives of five young women who are taken under their skirts in a Parisian forest or by an unknown man in the restrooms of a nightclub. They spread their legs on the backseat of a car, offer their girlfriends to their boyfriend, in short, they do everything a real Parisienne does. The sex is great as long as there's a lot of it and as long as it gets more perverse all the time. "Mademoiselle de Paris" is not the brainchild of one single man, but of 900 'co-producers' who worked with Marc Dorcel on the first adult movie to be produced by internet users. From the casting to the choice of scenes, the movie is the fruit of a collective perverse imagination. It had an extraordinary budget, for an extremely aesthetic and ultra-exciting production.

30 other products in the same category:

DVD Dorcel - My Wife is a Whore

DVD Dorcel - Luxure - The Education of my Wife

DVD Dorcel - My Wife is a Swinger

DVD Dorcel - My Cousin is a Whore

DVD Dorcel - The Revenge of a Daughter

DVD Dorcel - My Sister is a Whore

DVD Dorcel - My Cousin is a Whore

Fifty Shades Freed - Lost in Each Other Rechargeable...